A day doesn’t pass in which I don’t hear an ad for a new product called “SuperBeets®.” If you are a juice faster, then you know that beets are a staple in juicing. The flavor is light and sweet and a just a tad salty.

But do beets live up to the latest hype? Well, let’s have a look.

First off I should point out that because of all the hype and interest, beets are undergoing continuous studies. What we know so far is that beets lean toward…

Beets boast a host of phytonutrients, vitamins, and minerals. When it comes to cardiovascular care, we should already know that potassium is a key mineral. To get potassium, everyone says, “Eat a banana.” Well, a cup of beet juice contains more potassium than a banana and a lot less sugar.

Beets are anti-inflammatory, containing two nutrients called betanin and vulgaxanthin. Some of you might recognize how close vulgaxanthin is to astaxanthin, and yes, they are related. Astaxanthin is the red pigment in krill oil with antioxidant properties and vulgaxanthin is the red pigment in beets with antioxidant properties. Betanin is actually used as a dye, a safe dye. These colorful phytonutrients act as powerful antioxidants and anti-inflammatories, and also help remove harmful toxins we seem to pick up daily in our food, air, and water.

Beets also are a significant source of betaine, a very important phytonutrient that, besides assisting the liver in processing fat, also supports proper kidney function. Overall, betaine reduces the accumulation of fat in the liver. If you drink alcohol, you’ll want to drink beet juice at least twice a week; three times is even better.

Beets, known as a source of complete nutrition, are chock full of vitamins and minerals, and studies abound telling us beets are cardioprotective.

Ok, so there’s the potassium, the magnesium, the anti-inflammatories, but what makes beets the latest fad, especially for people who work out?

Beet juice contains DMG, or dimethylglycine. DMG does an awful lot in the body because it provides the building blocks for many things we need from hormones to antibodies to nucleic acids and more.

But for our heart, DMG improves oxygenation (relieving fatigue and increasing energy), and even improves mental clarity. Improving oxygenation improves circulation and reduces angina. DMG also decreases elevated homocysteine levels that can pit our arteries and start the cascade of events that lead to cardiovascular disease.

When I work out, I put TMG (trimethylglycine) into my coconut water which, when it gives up one methyl group, it becomes DMG.

And now for the kicker. TMG is also called betaine.

Nitric Oxide in our bodies is actually made by the arterial wall called the endothelium. Of course NO (nitric oxide) can’t be made if our diet is insufficient in the building blocks for it.

Nitrogen is part of fertilizer. Beets are nitrogen sponges, and thus, are rich in “natural” nitrates, especially if the beets were grown organically. Our bodies turn these nitrates into nitric oxide. Cooking beets will diminish the nitrates, but drinking beet juice will flood your body with nitrates.

Nitric oxide is a molecule that our body produces to help its 50 trillion cells communicate with each other by transmitting signals throughout the entire body.

There have been over 60,000 studies done on nitric oxide in the last 20 years and in 1998, The Nobel Prize for Medicine was given to three scientists that discovered the signaling role of nitric oxide.

So now you know why SuperBeets® are being hawked by everyone everywhere; because beets are so very good for us and you’ll spend big bucks to get them into your system.

But not everyone wants to spend big bucks, and the product touted isn’t even organic, though the beets are non GMO. The idea that their “crystals” are formed by a patented process doesn’t impress me because I know how to compare apples to oranges. 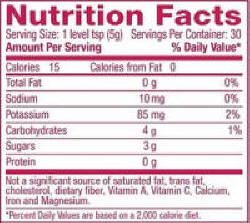 From WebMD we find that just ONE cup (8oz) of beet juice has approximately 100 calories and 25 grams of carbohydrates.

But SuperBeets® is better for you than regular old beat juice. At least we are told this.

The amount of potassium in one teaspoon of SuperBeets® is 85 mg.

Now take a look at the Nutrition Facts for the powdered beet root juice that Simply the Best carries. The product was chosen because it is organic and charged with nutrition.

When a glass of SuperBeets® gives you just 85 mg of potassium, the word “super” becomes meaningless. I am not impressed with SuperBeets®.

Five grams of powder is equal to a half liter of beet juice? No way. SuperBeets® is all hype. And at $120.60 per pound, even with their free bottle promotion, you’re still paying over $60.00 per pound.

It is my recommendation that if you want a workout drink that will give you the nutrition you need, or you just want to take care of your heart, you need real beet juice.

I’ve recently started adding, instead of TMG, a heaping teaspoon of beet juice powder to my coconut water for my workouts. I’ve convinced the boss of Simply the Best to sell this stuff, so soon they will have certified organic beet juice powder at the best price in the industry. Oh, and when I work out, I also add a two teaspoons of creatin hydrate because I’m past the age where my body makes growth hormone.

As you can see, I did some math above. I and pointed out that in just 16 oz of beet juice there are 2,310 mg of potassium. Yet on the label of SuperBeets®, they state that one serving (a level teaspoon) contains 85 mg of potassium. Even if that was a heaping teaspoon…or two, or three, or six, the amount of potassium wouldn’t equal that found in half a liter of beet juice.

The problem I had with their advertising is that claim: One heaping teaspoon is equal to a half liter of beet juice.

However, SuperBeets® is touted mainly for its nitric oxide content, and to be fair, I needed to test that.

It’s a simple process actually; I’ve been testing my nitric oxide levels for a year now. You can buy NO indicators on Amazon. You put one end in your mouth to get it wet, then take that end and fold it over to touch the indicator end and hold for ten seconds. Then you compare the color (pink) to the color chart on the bottle of indicators. Quite simple.

When my SuperBeets® arrived and I mixed up a “heaping” teaspoon, drank it down, waited 30 minutes, and tested my NO levels.

Was I surprised to see my NO levels equal to when I had drunk two cups of beet juice the day previous.

So, finally we have proof that the product, if taken to boost your nitric oxide levels, works just as advertised.  And I humbly apologize to the SuperBeets® people, and want them to know they’ve got a pretty nice product there.

If you want the best quality organic beet juice powder at a better price, check out Simply the Best. They even beat Swanson’s prices.

But let’s look at the Nutritional Information of this product one more time. You should note that the amount of folate listed there is just 2 mg short of the low side of minimum daily requirements for a pregnant mother, which are .400 mg to .600 mg. Also note that beets contain fat. But here is an interesting thing about fat and how it gets listed on the Nutritional Facts label.

Food industry lobbyists (try to find the word lobbyist in our Constitution) got laws passed that allowed them to put trans fats (partially hydrogenated oils) in foods and not list them on the labels “if the amount was not over a certain limit per serving size.” The same thing went for fats in general. If fat isn’t on the label, it doesn’t mean that fat isn’t in the substance, it simply means that it is under the “limits” set by congress. So the secret of not having your trans fats or just fats listed on the nutrition label is to make the serving size small enough to slide safely under the limits set by congress.

Until I found this label (above on the right), I had no idea that beets contained fats, specifically saturated fats, because we are all taught that saturated fats come from animals. The first fat I discovered to break that rule was coconut oil.

The Truth about Beet Juice