The best workout drink on the planet is coconut water. Coconut water will hydrate the blood and replace electrolytes faster than any other solution. [http://www.ncbi.nlm.nih.gov/pubmed/12056182]

Of the major electrolytes in the body (listed below) just two of them are not found in coconut water:  chloride and bicarbonate.

Since most of us probably get too much salt in our diets, the lack of chloride electrolytes in coconut water is usually not a problem, but if it is extremely hot out, you might want to put a pinch of Celtic Sea Salt in your coconut water. Bicarbonate (HCO3–), on the other hand, is not something we get much of in our diets, but since it’s a vital component to maintaining an alkaline pH in the body, our bodies will take carbon dioxide (CO2) and covert that to carbonic acid (H2CO3) which in turn loses the hydrogen and turns into bicarbonate which is then released by the pancreas.

If, however, you are doing a major workout (such as high intensity weight lifting, or running a marathon) your muscles are going to build up lactic acid and cause your muscles to ache. The bicarbonate electrolyte is the one that counters lactic acid. Thus, prior to a workout, I drink 12 ounces of Perrier water. And if your workout is intense or it’s hot out and you are really sweating, it’s pretty smart to add a bit of Celtic Sea Salt to your Coconut Water.

Here are the major electrolytes in the body:

You will notice that they all have an electrical charge (hence the name electrolyte). These electrical signatures create a “circuit” (a path around which electricity flows), which moves nutrients to the areas that need them the most. Or, as we stated in our article on Celtic Sea Salt, “Charged minerals go right to where they are needed.”

But just as important, electrolytes are inextricably involved in the electrical impulses operating our brains and nervous systems.

Without electrolytes, we cease to function and die. An imbalance (having too much of one or more electrolytes) can also be dangerous.

This also should tell us why the average person is not very healthy. In one lecture I attended a few years back, I learned that 90% of Americans suffer from either an imbalance of minerals or from a lack of minerals. The good news is that the human animal, with proper nutrition and minerals, can start to bounce back within 30 days.

We’ve mentioned in another article at this site how our cell membranes use cholesterol to create hydrophobic (water hating) bonds. Without these bonds, we’d all melt in a rain shower. Even more interesting is the simple fact that our cell membranes are the wiring systems that carry the electrical charges from electrolytes, which maintain our steady voltage. And perhaps even more interesting, if you’ll excuse the digression, is that each living cell gives off a light known as bioluminescence, but that’s a whole nother ballgame.

As you can see, the cell membrane is not just an overcoat that holds all the good stuff inside the cell. It is so important to the overall function of the human body that we must now bring in a short, but important, digression:

Trans fats resemble cholesterol. Thus, in our bodies, they take the place of cholesterol because the body can’t tell the two fats apart.

This is why no amount of trans fats should ever be ingested by a living creature.

The Roles of Electrolytes

Nerves and muscles respond to electrical impulses. For a muscle to contract, it needs calcium, sodium, and potassium. Muscles are constantly working, even when you’re sitting. Remember your heart? It’s a muscle.

Electrolytes are so important that the body has quite a few mechanisms and systems to regulate their concentrations, though mainly through the actions of hormones and the kidneys.

Without the proper concentration of electrolytes, a muscle won’t fully contract or could contract too much, or could even go into a spasm.

Because a living creature’s functions are biochemical and bioelectrical, nearly every action, reaction, and interaction in the body is associated with an electrical charge, and that charge is supplied by electrolytes.

When you work out, you sweat. When you sweat you lose electrolytes, mainly sodium (sweat is salty) and potassium, but you also lose the others, though in smaller quantities.

Obviously, when you sweat, you also lose water. Now here’s something of a warning: drinking too much water can cause a dangerous situation because you can wash away your electrolytes.

There is a disorder that looks like an addiction to water, called polydipsia. It is caused by an extreme thirst. Diabetics can suffer from this. Polydipsia can lead to death, as electrolytes are washed away.

Here are things that can cause a shortage or imbalance (overage) of electrolytes:

Thus, in a fully stocked first aid kit, you should always have a can of Coconut Water and some Celtic Sea Salt.

If you get a regular checkup, most of the time an electrolyte panel is completed as part of routine blood-work.

So, for those of you who are going to go for a workout, again let me hit some highlights.

If you’re going to do a workout that will build up lactic acid, then you’ll need some bicarbonate. Here is a list of mineral waters and their bicarbonate amounts I found at http://www.mgwater.com/bicarb.shtml

I cannot vouch for their taste since I’ve only tried the Perrier water.

And to rehydrate during and after the workout, you’re going to need some Coconut Water.

Nothing will rehydrate your blood faster. Nothing.

If you Google coconut water and hydration on the web, you’ll find some interesting stuff. Stuff I call BS. Some say it’s great if you like the taste. I am not big on the taste of coconut, but the first time I tasted it, it tasted nothing like coconut. It was slightly sweet. In fact, it tasted great.

Sports nutritionist Nancy Clark, MS, RD and author of Nancy Clark’s Sports Nutrition Guidebook says coconut water won’t rehydrate the body unless you can drink plenty of it. If you enjoy the taste and can tolerate large amounts, it could help keep you hydrated. [The Truth About Coconut Water]

Here’s more from that same article:

Staying hydrated is one of the most important things for recreational and professional athletes. And if the taste of coconut water helps you drink plenty of fluids, it is a fine choice for most people but may not be for those in prolonged physical activity.Coconut water is low in carbohydrates and sodium and rich in potassium, which is not exactly what athletes need when exercising rigorously, says Clark.

“Whether you choose a sports drink, coconut water, or plain water, they all work to keep your body hydrated. The challenge is when you exercise strenuously for more than three hours in the heat and lose lots of body fluids, you need easily absorbed carbs for quick energy and to replace lost electrolytes like sodium and potassium,” Clark says.

Please note: “The challenge is when you exercise strenuously for more than three hours ….”

If you exercise more than three hours (strenuously), you don’t need a sports drink, you need a good life insurance policy and a family plot. Again, I urge everyone this to read: The Best Exercise Advice You’ll Ever Hear.  (I.Link)

The more I read about coconut not being as good as sports drinks, the more it struck me that someone’s getting paid to promote this kind of crap. I was going to pull a comparison chart out of Bruce Fife’s book, Coconut Water that compared sports drinks to coconut water when I found one online. But first, here is a graph from Fife’s book that shows you how well coconut water hydrates.

All the studies show that coconut water is a superior hydrating substance, unless you decide to commit suicide by exercise.

From a site selling coconut water, we get a comparison chart similar to one found in Fife’s book, Coconut Water. It’s not complete, but you get the picture. What you don’t get in this chart is the very simple fact that coconut water also provides amino acids, many of which are necessary to good health. Sports drinks provide no amino acids.

Browsing the web sometimes just grinds my gears. Even one of my favorite sites (that I pay good money to visit) tells me that Coconut Water just doesn’t cut it for strenuous exercise because it lacks “salt.” In fact, I found a warning that went something like this: Coconut water contains a high amount of potassium, which can have a mild laxative effect. People with severe kidney disease or taking certain medications such as ACE inhibitors or potassium-sparing diuretics, or people who have been told to limit their potassium intake should consult their doctor before drinking coconut water.

Let us take a look at the mineral content of Coconut Water: 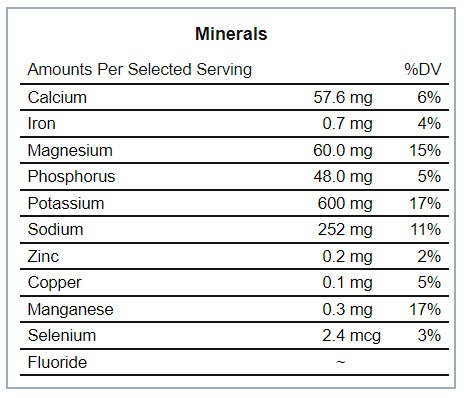 And the thing about potassium is, because of our huge intake of sodium, we need potassium to balance that out. Potassium is needed to maintain healthy blood pressure, especially when it comes with calcium and magnesium.

But the warnings? Ok, drink two cups at the most after a thirty minute workout and if you really, really got into a great sweat, suck on a chunk of Celtic Sea Salt.

One more thing: people with severe kidney disease are probably not working out very strenuously. At the most, they are walking . . . hopefully.

Here is a little bonus for you: Coconut Vinegar

is made from Coconut Water. Same electrolytes, same nutritional values, same amino acids. Like Apple Cider Vinegar, it’s anabolic (builds up) rather than catabolic (breaks down, like white vinegar). And some of you will love this: It’s lighter tasting, and less sour than apple cider vinegar. I’ve already substituted Coconut Vinegar in all my recipes that call for Apple Cider Vinegar, and they turned out perfect. Soon I shall be making pickles with it.