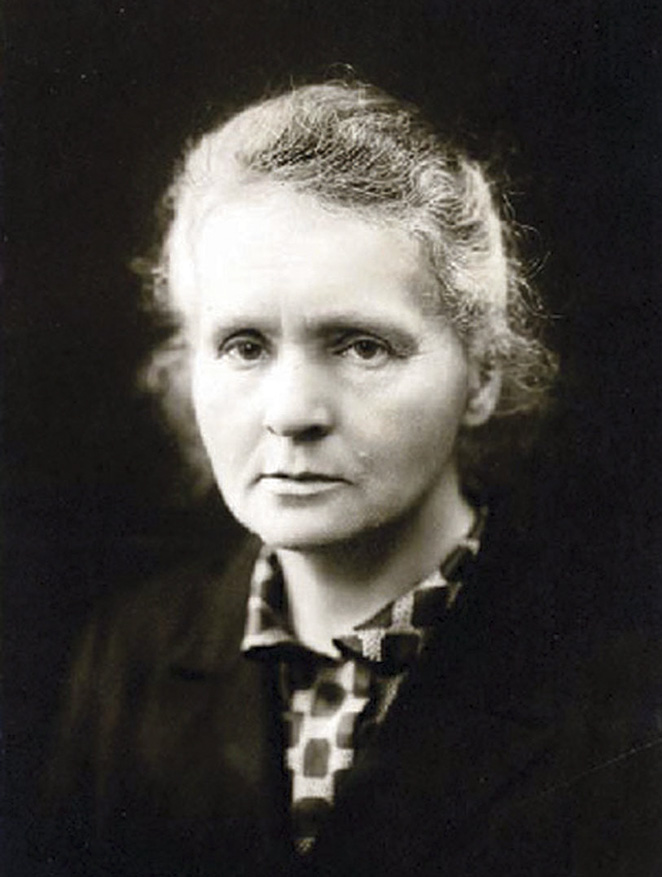 There are many pages on the web dedicated to her and her work. She once stated that all she wanted to do was learn; learn everything she could.

Born Marya Sklodowska in Warsaw Poland on November 7, 1867, she led a “Spartan” life according to her biographers. Her family were teachers and dirt poor. Early on she yearned to enter the sciences, something women did not do in her time, but her dreams were to stay a fantasy while she worked as a tutor supporting her sister who was in Medical school.

Finally, in 1891, Marya arrived in Paris, self-taught and driven. She graduated in physics at the top of her class, beating everyone. She next decided to get a mathematics degree. She ended her studies with a doctorate in Physics.

While she was studying for her doctorate, Henri Becquerel sent her samples of a uranium salt that had left an impression on x-ray film, through the envelope in which they were contained.

Marie found her life’s work and together with Pierre, they explored and sifted through tons of minerals. She coined the term “radioactive,” purified the radioactive elements in uranium, polonium, and radium (which Marie discovered), while her husband studied the properties of radiation. Together with Becquerel, the Curies won the Nobel Prize in physics for their discovery of natural radioactivity.

Now this is where it gets weird.

Having discovered new radioactive minerals with amazing properties, they found themselves stuck with something that was of no use, beyond scientific investigation. Eve Curie, in her biography of her mother, described an “odd joy” her parents exhibited when they discovered that radium would, belatedly, burn “gaping holes” in their flesh and cause a painful inflammation in their fingers.

Pierre Curie presented a paper in 1901 to the Academie Francaise. The following is a short excerpt from within its pages.

After exposure to the rays (of radium) the skin became red …; it looked like a burn, but was scarcely painful. After several days the red area without enlarging grew redder; on the twentieth day scabs formed and when they fell away the let a deep wound …; healing of the epidermis first began on the forty-second day ….

… Mme. Curie carried a few centigrams of the very active substance in a sealed tube and received similar burns…. One exposure of less than half an hour … resulted in a red spot for fifteen days later, that took fifteen more days to heal.

… we have suffered from various changes in our hands during researches…. The skin of the hands scales; the tips of the fingers come into contact with tubes or capsules that contain very active preparations become hard and sometimes extremely painful; one o us had inflamed fingertips for a fortnight, which subsided with scaling, but at the end of two months were still painful.

So, there you have the results of their studies. The most brilliant woman ever to enter the sciences, with her brilliant husband, both of whom were awarded the Nobel prize in physics – what did these brilliant people conclude?

“We’ve discovered a cure for cancer!”

This, I’m sure, is not the first time in history that brilliance shown so brightly as to blind common sense.

Let’s jump ahead to all the wonderful products made from this new cure.

The Revigator Company headquartered in San Francisco invented a way to keep radium from dissipating into the air when added to water. In 1929 they sold thousands of bottles of this wonderful cure for the exorbitant price of $29.50 per bottle. [http://www.orau.org/ptp/articlesstories/quackstory.htm]

They also created a bottle made of radium that you could fill every night with water and drink the radium water in the morning!

Another company invented a similar, but cheaper device that you could carry with you on the road, so you could enjoy your radium water anywhere, any time.

The AMA got in on the action, not wanting any companies to fleece the public with devices that didn’t deliver as promised and they enacted a little law requiring all devices to generate a specific amount of radiation in 24 hours. This cut down on the number of devices on the market, for the AMA’s standard was pretty high. It was so high as to guarantee death to the user in three to five years.

With the price of radium rising 1000% in just four short years (according to Dr Emanuel Josephson in his book, Your Life is Their Toy) a number of products found their way to the open market: radium salves (even one for hemorrhoids – not to mention the radium suppositories), beauty creams, toothpaste, ear plugs, chocolate bars, soap, and even contraceptives (the gift that kept on giving).

Thanx to the Science Museum of Minnesota, Questionable Medical Devices, we can tell you about the Cosmos Bag; a cloth bag made of course cotton that contained a small amount of low-grade radioactive ore. You applied it to joints for rheumatism and arthritis.

And for your gala party on Cinco de Mayo, you must serve beverages in Fiestaware! The red glaze in Fiestaware was made from radioactive material.

Do you have a watch with hands that glow? Radium was the first substance used to make the watch hands glow. Women were hired to brush radium paint onto the tiny watch hands. The problem was that the brush head was unmanageable and the women licked the brush to keep the head nice and pointy. Their tongues eventually fell off, and that was only the beginning. Leukemia and bone cancer followed. And then death. [Must Read: “The Radium Girls”]

With Radium selling at ten million dollars a pound (back in the twenties) doctors everywhere were investing in this wonderful cancer cure. A cure that caused cancer and leukemia. It was during this period that physicians first began to rake in six figured incomes. The only “cures” for cancer at that time were surgery, x-rays, or radium. Anything outside of this tight circle was attacked by the AMA, stalked by the American Cancer Control Society (soon to be named the American Cancer Society) and slandered by oncologists everywhere.

Pierre Curie, sick with bone cancer and worn down from his endless hours working, stepped into a street in 1906 and was run down. In some books they say he was hit by a car; in a movie I’ve seen, he was run over by a team of horses pulling a buggy. Either way, he was spared a long, drawn-out, agonizingly painful death from radium poisoning.

Marie Curie went on to raise their children on her own and became the first person to be awarded a second Nobel Prize, this time in chemistry. She suffered for years from radiation poisoning and finally succumbed to “aplastic pernicious anemia” or, as we call it today, leukemia.

From 1912, was colorized by Marina Amaral from Brazil. marinamaral.com

Marie Curie died believing that, “Radium was useful – magnificently useful.” Today, we know that radium and other radioactive minerals have only three primary uses: Bombs and Nuclear Power Plants (that will be around for centuries to curse us) are the first two that come to mind. The last is Nuclear Medicine. This is a field I’m not that familiar with, but I have a strange feeling that the future will tell us a lot more about this field than we wish to know.

Untold numbers of people suffered and died from radioactivity. One physician I came across estimated that maybe one person in one thousand was cured of cancer by radium, but probably succumbed to radium poisoning later on. Radioactive products and cures were sold into the 1950s, according to Paul. W. Frame. [RADIOACTIVE CURATIVE DEVICES AND SPAS This article was originally published in the Oak Ridger newspaper, 5 November 1989. http://www.orau.org/ptp/articlesstories/quackstory.htm]

In fact, even in the 1960s there were, only God knows why, still products with radium in them: a cigarette filter that was said to diminish the nicotine in a cigarette. And today, the Japanese are cleaning up the radioactive monazite sands on the beaches of Kerala, India by a method called “dilute and disperse,” which in reality is taking a few grains of sand and incorporating them into consumer products and shipping them around the world.

Marie Curie and her husband Pierre were very smart scientists. However, their brilliance did not protect them from themselves. One of her most famous quotations is: “Nothing in life is to be feared. It is only to be understood.”

Sadly, there are some things to be feared, or at least respected: such as ignorance and its consequences. Perhaps this will help us define the word fraud as it applies to the medical field: Fraud is a medical technique that is pervasive but untested.

From A Short History of Nearly Everything, we get this summation:

For a long time it was assumed that anything as miraculously energetic as radioactivity must be beneficial. For years manufacturers of both paste and laxatives put radioactive thorium in their products. Radioactivity wasn’t banned in consumer products until 1938. By this time it was much too late for Madame Curie, who died of leukemia in 1934. Radiation in fact, is so pernicious and long lasting that even now her papers for the 1890’s, even her cookbooks are too dangerous to handle. Her lab books are kept in lead-lined boxes and those who wish to see them must don protective clothing.

Theories are great, but when in practice they are deadly, it’s time to step back and take a breather. Could it be that Marie Curie was silently shaken that she’d discovered a wondrous substance for which there was no practical application? Could it be that this led her to make the most outrageous claim of her time?

Marie Curie’s Belongings Will Be Radioactive For Another 1,500 Years

A Brief History of Human Experiments

You Must Have Holes in Your Head