The Power of the Pomegranate 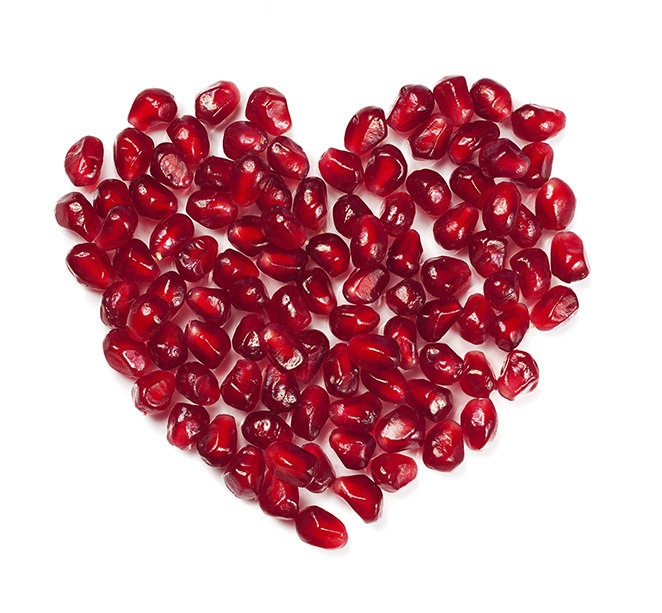 When I lived in Israel, I learned a lot about the pomegranate. It comes from the area we today call Iran and has become a bit of an icon for the three religions stemming from that region of the world.

For the Jews, it represents the fruit that Eve ate in the Book of Genesis, from the tree of the knowledge of good and evil. Yes, everyone today calls it an apple, but the French term, “pomegranate” means “Apple of Granada.”

A pomegranate is bright red with a “crown” on top.

The round red fruit with its own crown, or calyx, decorated the robes of Jewish priests and some of the pillars in the temple in Jerusalem. [BeliefNet]

I remember how it was a favorite fruit of Rosh Hashana, the Jewish New Year. A rabbi explained to me that the fruit contains exactly 613 seeds, the same number of mitzvaot, or commandments. Then he winked at me.

Many a salad during that time of year contains pomegranate seeds.

For Christians, pomegranates show up symbolically in many religious paintings of the renaissance, representing the “fullness of his suffering and resurrection.”

According to the Quran, the gardens of paradise include pomegranates. It is important, tradition says, to eat every seed of a pomegranate because one can’t be sure which aril came from paradise. The prophet Mohammed is said to have encouraged his followers to eat pomegranates to ward off envy and hatred. [BeliefNet]

I also learned that the pomegranate has been used a natural dye for centuries. Just spill some juice on a white shirt and it will take centuries to get that stain out.

Recently the pomegranate has been the subject of quite a few studies. At WebMD you can find quite a bit on this fruit, mainly because it not only helps prevent atherosclerosis (hardening of the arteries) but it also appears to soften those hardened arteries and remove some of that gunky plaque. [PubMed]

When you start to clear clogged arteries, you find your blood pressure starts to normalize. There is no medicine that does this, but this friendly fruit seems to do it, all while tasting delicious. [WebMD] Thus the pomegranate can help reverse cardiovascular disease and prevent heart attacks and stroke.

Pomegranates are charged with nutrition. They are super rich in antioxidants: tannins, polyphenols, and anthocyanins. From our article on Chronic Inflammation:

Anthocyanins are the water-soluble flavonoid pigments in fruits and vegetables that help inhibit inflammatory COX-1 and COX-2 enzymes. [British Journal of Sports Medicine, 2006] Many of the fruits listed below contain these phytochemicals, however here is a graph we got from Wikipedia. Not in the graph is Red Cabbage, which is the vegetable with the most anthocyanins. In fact, a study published in Scientific Horticulture stated that red cabbage contained 36 different anthocyanins which help with neurological functions, promote cardiovascular health, and assist with weight loss.

How do these anthocyanins assist with weight loss? Well, I wrote this little article on a hormone found in fat cells called Adiponectin. When adiponectin is released, it lowers inflammation, decreases appetite, and initiates the fat burning process. I’m sure Dr Oz has called Raspberry Ketones a MIRACLE, when in reality, it’s the anthocyanins in raspberries that are doing all the work, and it’s no miracle; just microbiology.

There are more polyphenols in pomegranate juice than in “blueberries, cranberries, green tea, orange juice or even red wine.” [Ref] Resveratrol, trans-resveratrol to be precise, is a polyphenol. Polyphenols are antioxidants that nutritional science has been investigating for treatment of digestive disorders, aging, diabetes, weight management, neurodegenerative disease, and cardiovascular diseases. They are also powerfully anti-inflammatory.

Pomegranate juice is also chocked full of polyphenols with the capacity to mop up free radicals and interfere with chronic inflammation. This juice, in fact, contains more polyphenols than blueberries, cranberries, green tea, orange juice or even red wine.

Most of the clinical studies exploring the effects of pomegranate juice have been small, but with promising results that warrant further investigation (6,7). Drinking about 2 ounces daily for a year has been shown to reduce the intimal-media thickness of the carotid artery – a measurement of artery walls that’s used to track the progression of atherosclerotic disease. In another study, daily intake of about 8 ounces is reported to decrease stress-induced ischemia in patients with heart disease compared to a placebo. It may be that pomegranate polyphenols help protect blood vessels or influence inflammation in artery walls. [Ref]

A strict low carb diet is deadly because our bodies need these amazing phytochemicals found in fruits. Anthocyanin increases the amount of adiponectin in our blood stream, and as many of you know, the energy you get from burning fat is greater than what you get burning sugar. Also, most of us will deplete our sugar stores long before we run out of fat.

Now get this: at MedlinePlus I found the following:

It [the pomegranate] is also used for conditions of the digestive tract, including diarrhea, dysentery, and tapeworm and other intestinal parasites.

For years I’ve given my pups coconut oil because it’s parasiticidic . [Don’t get to use that word much.] Coconut oil is one of the best remedies for parasites, but now we have another weapon in our arsenal.

I love when we’ve published something and while researching something very different, we run across information that should have been in that original piece we just published.

The pomegranate is ANTI-AGING.

So, to sum it up, pomegranate juice is a powerhouse of antioxidants and phytochemicals that protect the heart (and the brain), help heal atherosclerosis, boost the immune system, fight inflammation, protect from cancer, and help you to lose weight.

Have I got that all?

You can add it to a smoothie, a salad dressing, and even a curry dish as they do in India. I made a curry last week with lots of turmeric (truth be told, I put a bit of turmeric in practically everything I make), and I added a bit of coconut milk powder to the recipe to finish it off. But then an idea hit me. I tossed in a heaping tablespoon of pomegranate juice powder and all I can say is: Wow.

It really added just a little something. And now, today, all my workout drinks contain a bit of beet juice powder and pomegranate juice powder.

So, all I have left to tell you is that, Simply the Best carries a Certified Organic Pomegranate Juice Powder that will ship in a reusable, food-safe (no BPA) plastic container that is stronger than anything Rubbermade® ever produced. Though since I’m involved with the CEO, I’m helping to bring the cost of shipping down by using smaller, quantities in light weight bags. So, when you go there, you might find some more inexpensive options.

15 Health Benefits of Pomegranate, According to Science (+8 Delicious Recipes)

The Next Generation of Nitric Oxide